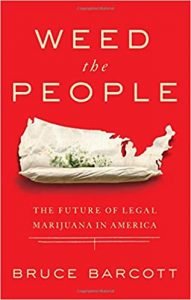 Book: Weed the People: The Future of Legal Marijuana in America by Bruce Barcott

Cannabis legalization is the next major turn in history. Perhaps the most demonized substance in the USA, scientifically known as Cannabis sativa, simply a fast-growing plant that evolved into the nation’s most popular illegal drug. The tide has turned now: in 1996, California passed the first law for medicinal cannabis use which allowed patients to cultivate and use cannabis with a doctor’s permission. Until 2010, twenty states and the District of Columbia passed laws on medicinal cannabis. In 2012, the states of Colorado and Washington adopted measures for cannabis legalization for adults aged 21 and above. The significance of the change in America’s relationship with cannabis shouldn’t be assessed merely in economic and social terms: much deeper changes are at stake – cultural movements, social as well as financial adjustments. The place of cannabis in people’s lives is being reexamined and recalibrated. Four decades after Richard Nixon declared the War on Drugs, this lengthy campaign reached the point of exhaustion and failure. Weed the People will help lead the readers a step closer to the future. 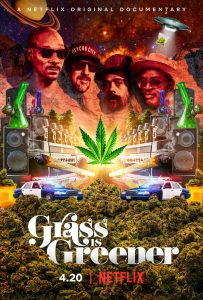 In the 1900s, cannabis entered the US market from New Orleans, Louisiana and El Passo, Texas. Soon it becomes popular among Afro Americans and Mexicans in America, reshaping the American cultural formation, night life and art scene. At the same time, the prohibitionary movement emerged, combining a strategy of war and fake news to fight part of the American people.

Fab Five Freddy, as director, takes us to the origins of cannabis in the USA and the contradictions generated there. American cannabis history is revealed through the history of musical legends such as Bob Marley, Louis Armstrong, Duke Ellington, Snoop Dogg and many others, portraying a celebration of cannabis inheritance in jazz, hip hop and global music. The documentary offers a sophisticated intersectional debate on the war on drugs, the topic of debate being cannabis prohibition as a key component to the oppression of black people, women and antimilitary movements of the 20th century. We learn about the injustices from the past pressing through to today on behalf of prohibition and how Reefer Madness took over the USA. The documentary is available for streaming on Netflix (https://www.netflix.com/nl-en/title/80213712).

Braking Good: or how a TV show about drug production aroused interest in the sciences?