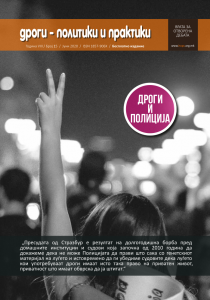 The police often treats unlawfully people who use drugs, Interview with Natasha Boshkova

The verdict from Strasbourg Court was the result of years-long battle before domestic institutions and courts initiated in 2010, in order to prove that the police cannot do as they please with people’s genetic material, but also to convince courts that drug users also have the right to a private life, a right courts are obligated to protect.

Police officers also must stop and rigorously prevent any violations of the law and international standards by other police officers. Police staff, on all levels, shall be personally responsible and bear responsibility for their actions or failures or the orders issued to their subordinates. Author: Janaki Mitrovski

Users Bearing in mind the primary function of the police, which is protection and respect of human rights and freedoms, and simultaneously prevention and tracing punishable crimes, as well as prosecution of perpetrators, there exists a “slippery terrain” and consequently frequent dilemmas among drug users on the limitations of police authorizations and possible overstepping of these. Author: Rosana Bogatinova

The police maintains the public peace and order, dealing with people who exhibit indecent or violent behaviours, with traffic accidents, firearm violence, all the while constantly exposed to huge threats to their lives. Author: Bogdan Kolev

Prevention and Drugs Ab/use in Traffic

Preventive measures involve measures and activities of state and other institutions and bodies towards prevention of negative social occurrences as well as the related consequences. The basic factors determining traffic safety are the human being, the vehicle and the roads, hence the measures for preventive actions must be aimed towards these three. Author: Jasmina Pijanmanova

The Boundaries of Research Ethics: Between Confidentiality and Truthfulness

By researching marginalized communities and their encounters with the law, sociologists and cultural anthropologists take the risk of being perceived as undercover police informants by their subjects of research, while by the authorities, on the otherhand, as co-conspirators in the criminal offences depicted, particularly when they refuse to reveal the identity of their respondents. Author: Ilina Jakimovska

The cannabis situation in 2020, globally and in Macedonia

The act of cannabis legalization itself leads to specific shifts. According to the latest research in Canada and several US states (Colorado and Oregon), there has been a decrease in cannabis use among the young population, somewhere as low as a 50% drop. However, what is interesting is that the number of cannabis users among the older population is increasing, among individuals belonging to the age range from 45 to 80 (even older). Author: Filip Sekuloski

Our recommendation
News
IN MEMORIAM